White Mountain Pools sells installs and services in ground and above ground pools and hot tubs. On their floor they have several sample hot tubs running, making their electric bill somewhat of a fright.

This system was installed as a PPA. Barrington Power LLC, a financing arm of Seacoast Energy Alternatives owns and maintains this system and charges White Mountain Pools for the power it makes at a rate lower than they pay their electric utility. White Mountain signed a contract, and an easement for the use of their roof but paid no money up front.

Using an internet based monitoring tool linked to the inverter White Mountain Pools can see at any moment, on their iPhones, what their solar electric system is doing. 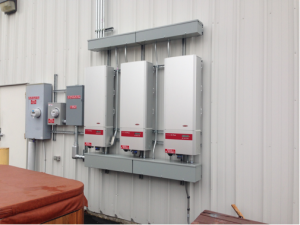 Three inverters share the load from 144 250 watt panels and convert their DC power to AC power for the building electrical system.